With a forecast of Scorchio and the prospect of doing thirteen locks, we boldly went! 0900 departure from near bridge 103, up to Wigrams Turn and a right turn into the Grand Union proper, noting that it was originally a narrow canal (Warwick & Napton) but got modernised back in the 30’s with giant locks but all with hydraulic paddle gear. This has two advantages: it is easier to use, just wind the handle and they lift very smoothly plus they are giant paddles, so locks empty and fill pretty pronto. Luckily for us we teamed up with other boats (a wee aluminium Otter boat, 30 foot? Called Dragonfly, nice folk, Graham & Josie) which makes the ten Stockton locks a pleasure, well almost. It was getting more and more Scorchio, with boat temperatures nudging 30! 😎😎☀️☀️☀️☀️.

At the bottom of this flight was the Blue Lias pub, named after the famous stone that was quarried nearby and used for most of the Thames Embankment. Our lock sharing chums decided that was enough, it was their first day out, but with just two more locks to do and a bigger choice of pubs, we pressed on to moor just before bridge 25 at Cuttle, near Long Itchington. Two pubs here, the Two Boats and the Cuttle Inn, which we visited for a pint of Timothy Taylor, Landlord. £3.70, to which i remarked, we obviously haven’t gone far enough north yet to get cheaper beer! It was a bit busy here and there was a river further on (the river Itchen), so we moved the boat all of 300 yds and gave the Boggle a run and a swim.

Too hot to mess about in the galley, so we investigated the village and decided to visit the Harvester. They had three real ales on plus a pizza oven out in the courtyard. Choose your toppings for £7.50, sorted. One Piri Piri chicken and one chorizo/chilli/mozzarella! Nice friendly place even if the beers were a little cloudy. We met Karen , a local lady, out on her own like us, not fancying cooking so we shared a table with her. Only a 4.2 hr sail but it felt a lot longer, the heat not helping at all. A pipe and a Black Grouse to finish, bed around ten!

Note the hydraulic winding gear and colour coordinated outfit (the only thing is coordinated!)

Just a 4.2 hr jaunt today. Thru that wretched Braunston Tunnel – the one with the kink! Met several boats coming thru! Then its six big, heavy locks. Luckily we teamed up with some holidaying Germans who had hired their Pintail boat from Rugby for 3 weeks. They had done a big ring down to London/Oxford/Thames and were now on their way back! I said we were on day two and normally do only 4 hours! He did raise both eyebrows at this! But understood that we live on our boat and were in no hurry. They managed to get into a lock ahead of us, that already had a boat waiting, so we let them go. Took us ages to get thru the last two locks but that’s the way it is. It was getting hotter and hotter but we puttered on past all the busy workshops and hire fleets, the Gongoozlers Rest cafe and made the left hand turn at the iron bridge. Not done this for a long time. Past more moored boats and finally had enough at bridge 102. A was too hot and we did promise our panting dog a swim! 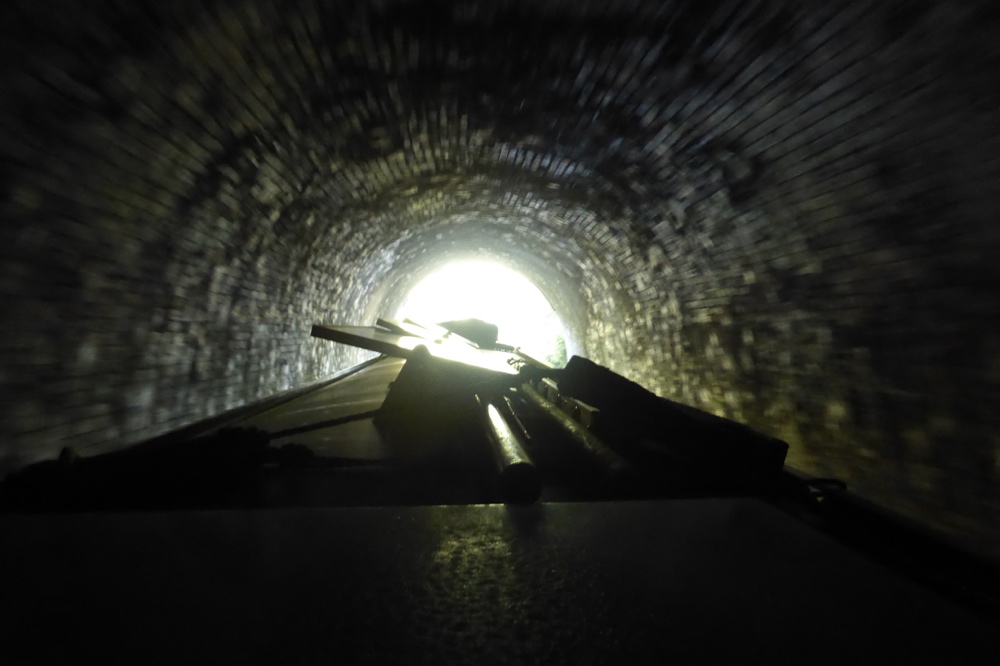 And Viv working the last of the heavy locks 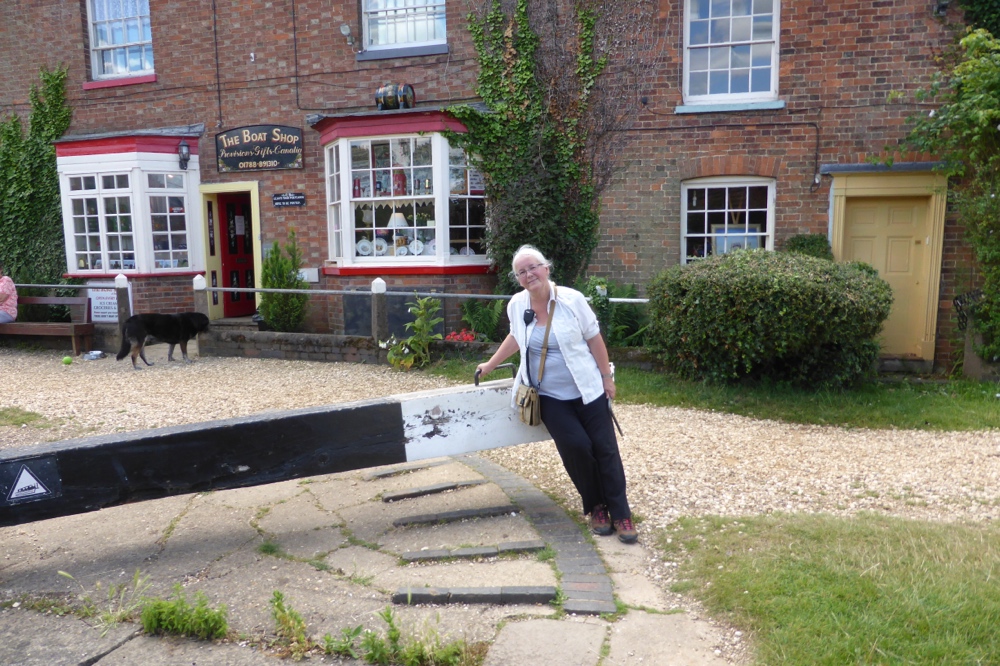 The opposite had bees inside – not a sign you see often! 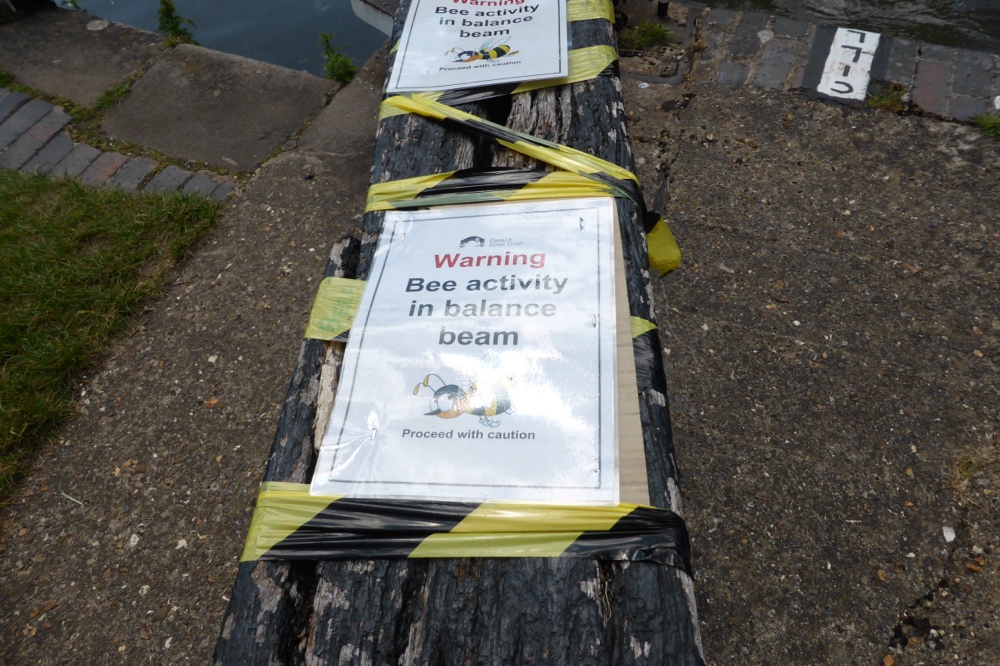 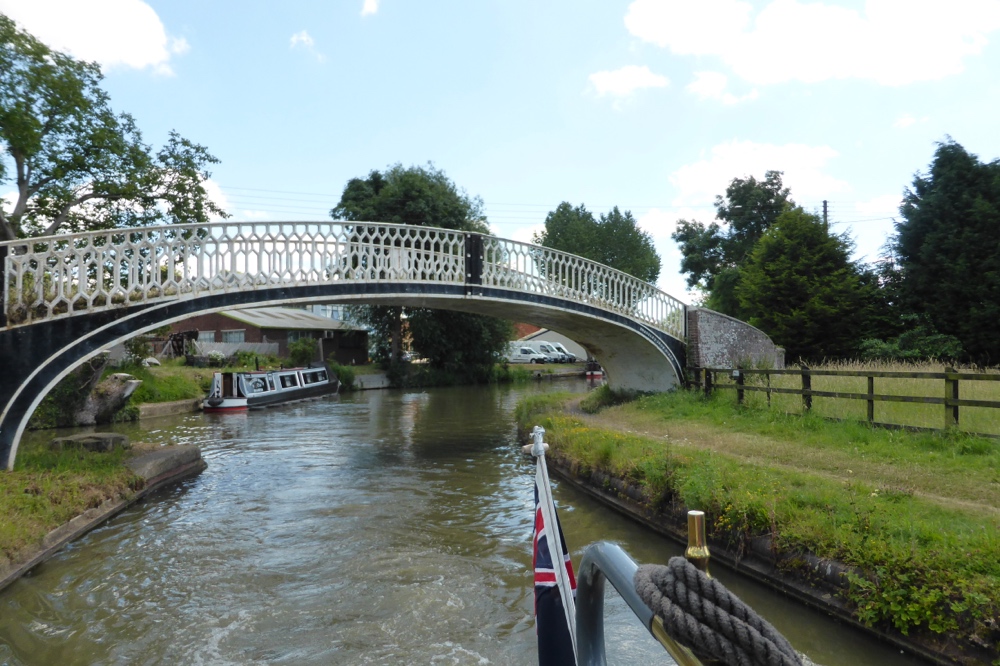 With the ensign hoist, the wee ship fully vittled, we slipped our lines and sailed serenely from our friendly shores into the not quite unknown. Aaaaargh, we be orf! Through Crick, through the tunnel, and down through Watford locks minding the Gap and mooring just beyond bridge No 3, outside Welton Havenmarina. Three and a half hours – that’s it. Seven locks and 5 5/8 miles. 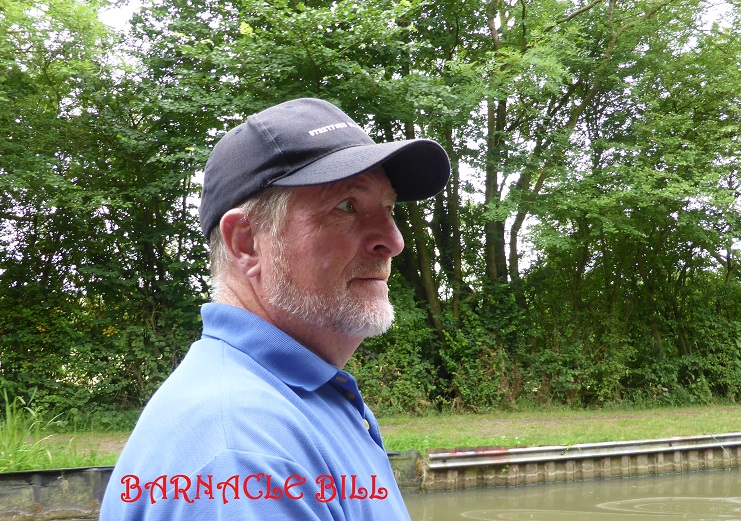 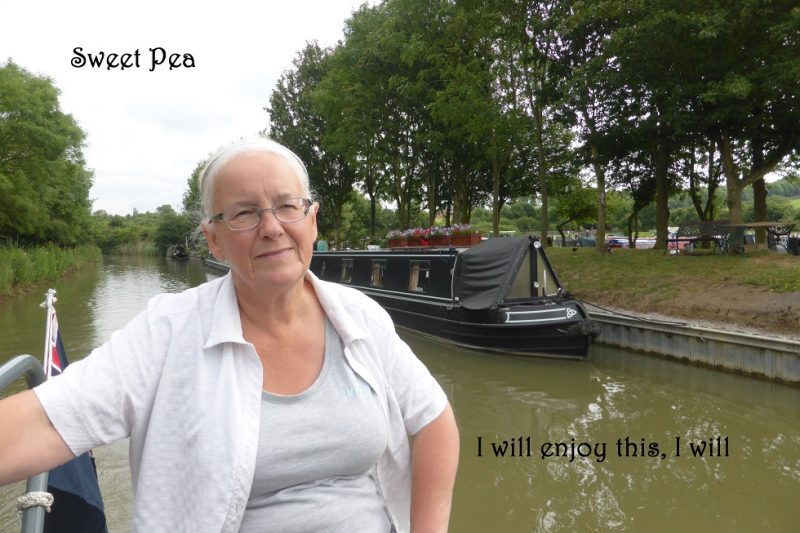 Are the conscripts happy? I’ll have to lay on extra rum rations methinks! 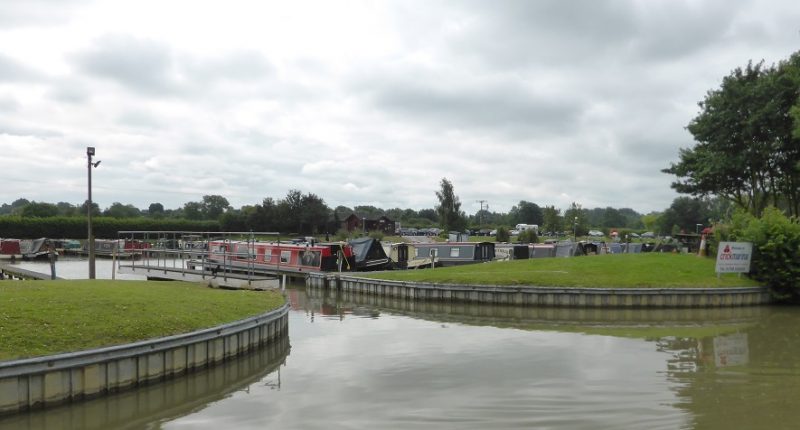 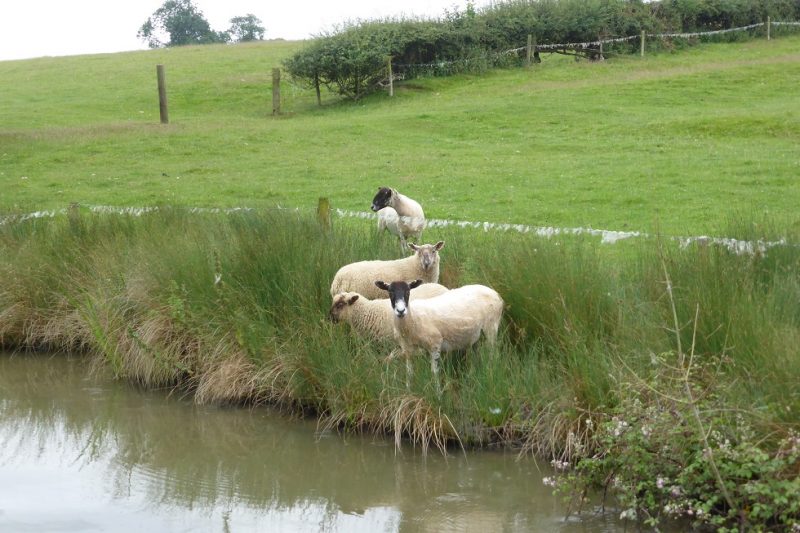 Past Shaun and not so Shaun 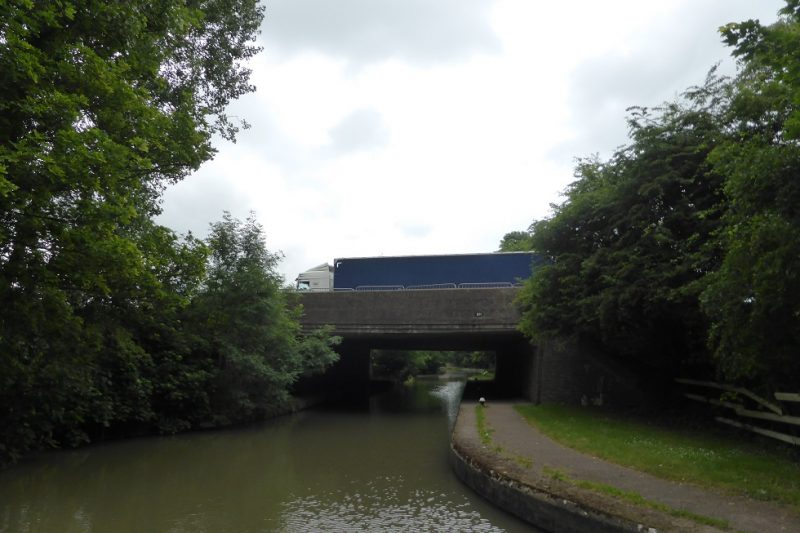 Under the M1 motorway, wryly watching the scurrying commuters. 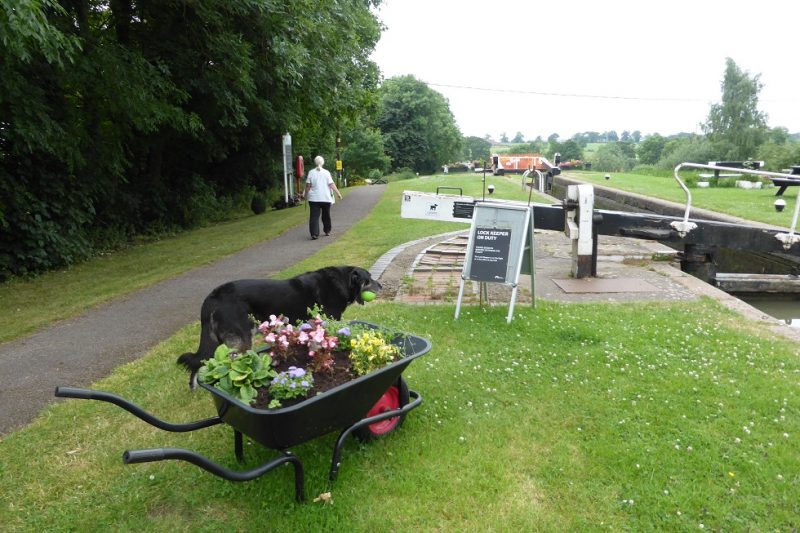 The most pleasant Watford flight, little public access here, so very few gongoozlers. You have to seek out the (volunteer) lock keeper and “book in” the system. One hire boat just zoomed past the Q and went straight into the lock – the lockie made em come out again! Good for him. Had a good 30 min wait as three boats came up.  Steve drove – Viv wheeled that windlass and Toby, well, just supervised. 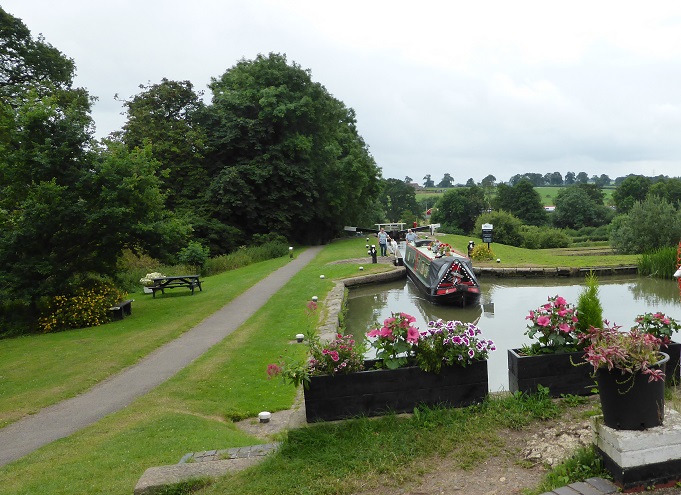 Four staircase and three narrow locks here. 45min to an hour to get thru. 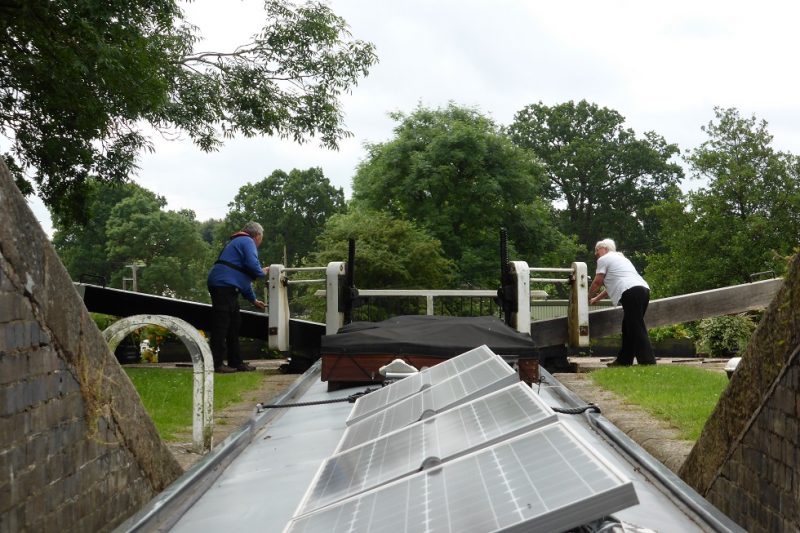 It does help to have the volunteers on. 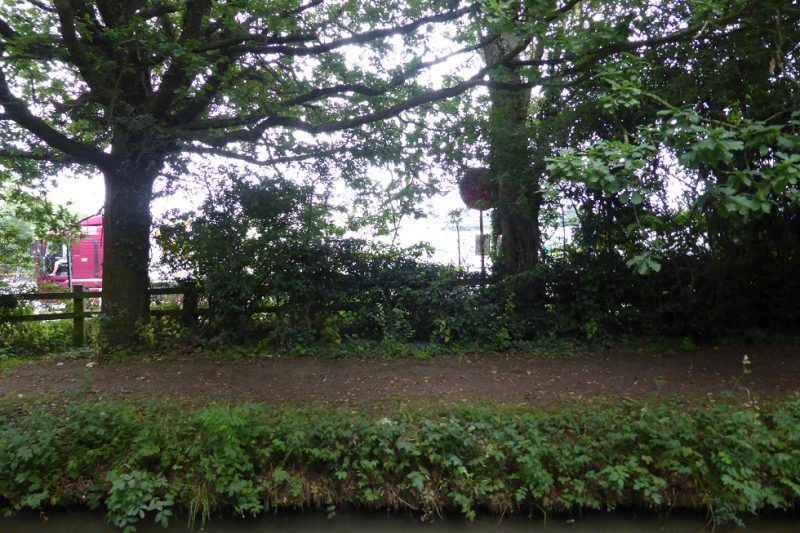 Thru these trees is the infamous Watford Gap services – we creep past, they are totally unaware of our presence. Good.  It is very busy today – nothing at first and then maybe a dozen or more boats all chugging past our delightful mooring. Some boats a little too fast – Steve puts his “Slow Down – or Else” notice embarrassingly in the window! 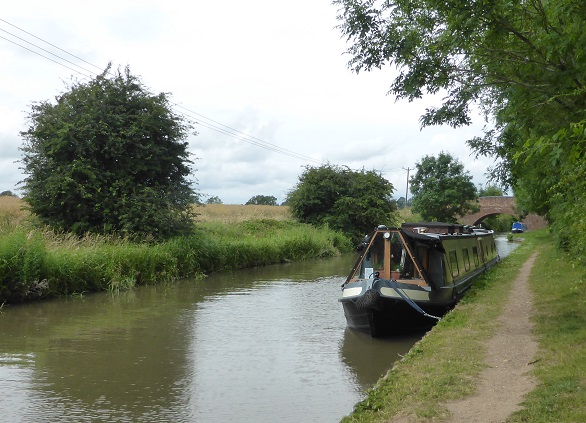 A little image of the guide book – showing our vast trek today – all of one and a half pages, from the star on the right, to the very bottom left! 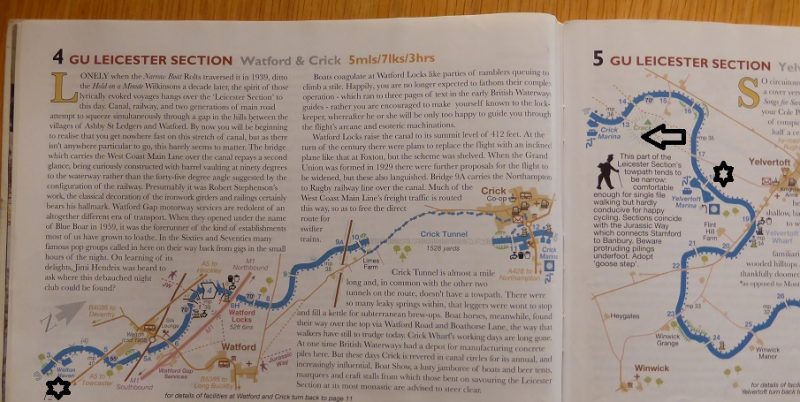 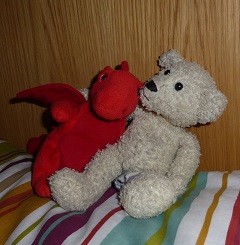