We stayed put on Thursday. Nice spot. Very busy but then this stretch is a link canal – part of the Warwickshire ring as well as the GU plus very close to lots of hire bases and boy, did we see lots of boats – 50 or more? Plus 2 or 3 wide beams! The dressing gong sounded at 6, so Steve changed for dinner or at least for another G&T! Meatballs with a tomato & chilli sauce with spaghetti (Nice marriage of Spanish and Italian, albóndigas with arrabbiata sauce con espagueti!). Disaster! No vino! Those Sicilians drunk the last drop (well, we did force them!). 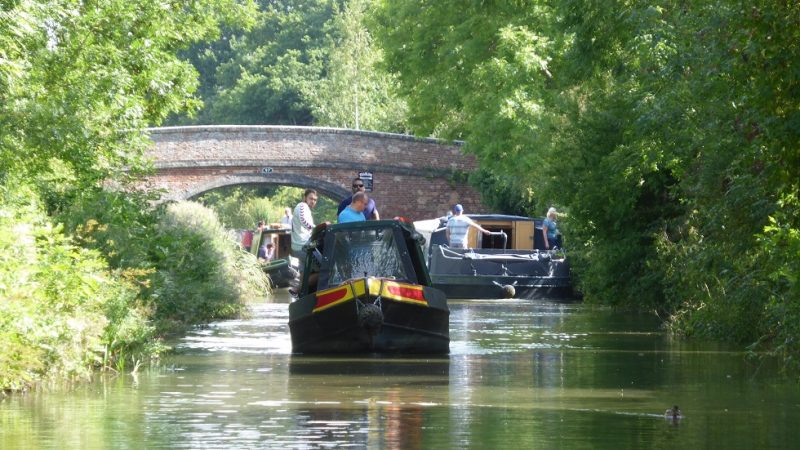 The next day we set off about 10 and found ourselves behind this fat boat! We crept along on tick over for a few miles – he kept stopping to let boats pass and then he waved us on, which was nice. He was heading for Dunchurch (now fully open!) 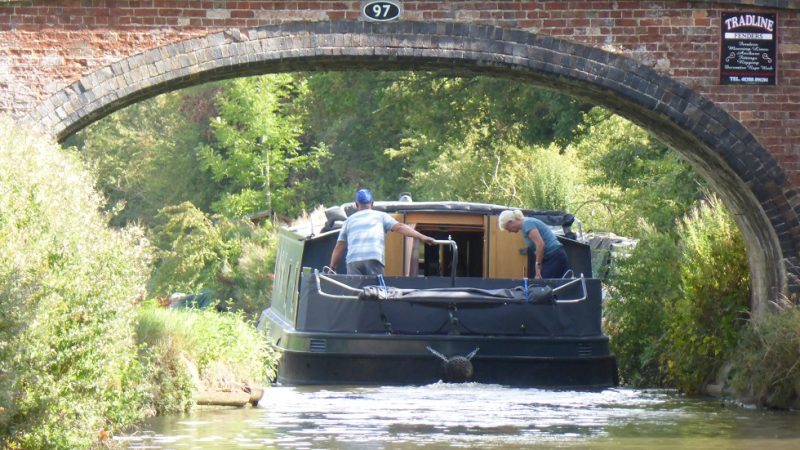 Only enough room for one wide beam! 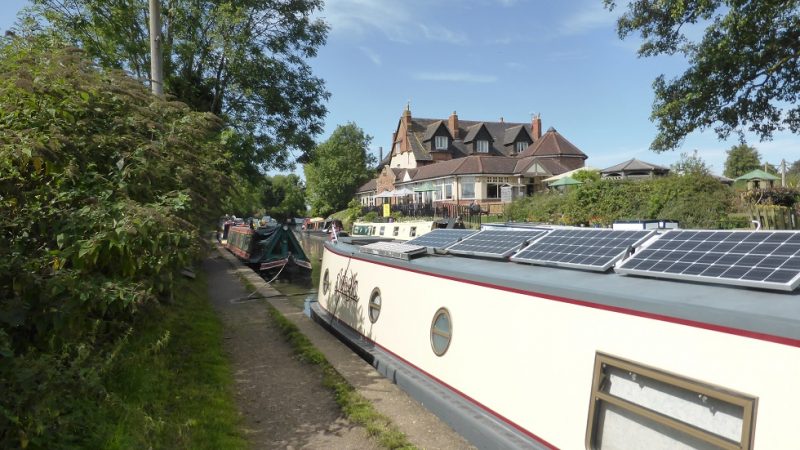 It looked so busy, we deployed the standard plan – moor as soon as you find a spot! This one is opposite the Boat Inn. We popped round to Midland Chandlers to spend £150 on paints (bitumen to cover up the lock-rash, maroon enamel for the tunnel flash), replacement mooring chains, brushes and a full set of engine filters & oils for the service (due soon), Elsan Green and giant sticky foam stuff to do a proper job of the weed hatch. Such fun lies ahead!! To reward us for all this and by now, the temperature had rocketed to 30+ in the cratch and 27.8 inside the boat, so everybody back out and over to the Boat Inn (2 for 1 on all meals!), the beer is so-so here but the food was good and £19 for two meals and two beers is very good. We also met a nice couple on an adjacent table who overheard us talking about overwintering in Spain and so very coincidentally, they did too and at the same place – weird – so we chatted about Mojacar and also boats. They had just signed up up with Dunchurch Pools marina that very morning  – they had come from the Saltisford arm, where they left their boat. Such an odd but interesting coincidence – their blog can be found here: Linda & Richard

After that, Viv goes shopping for that vital restock (pies from the magnificent butchers, tonic & vino from the Londis!).