Spoke too soon – had to get the T-shirt, shorts and flip-flops back out as the weather has returned to (slightly) Scorchio!  Just as well as we’re due to have new batteries and sit out for a few days at Springwood Haven – a few miles north of Nuneaton. So, it was a sad Goodbye to the Ashby Canal and up the Coventry. Boy was it busy – boats in front, boats behind and plenty to the side as we bimbled along on tick-over. We arrived around lunchtime and Steve went over to Springwood Haven to meet Kevin of Onboard Energy, who said we can move into the marina early tomorrow, in order to “do” the batteries. 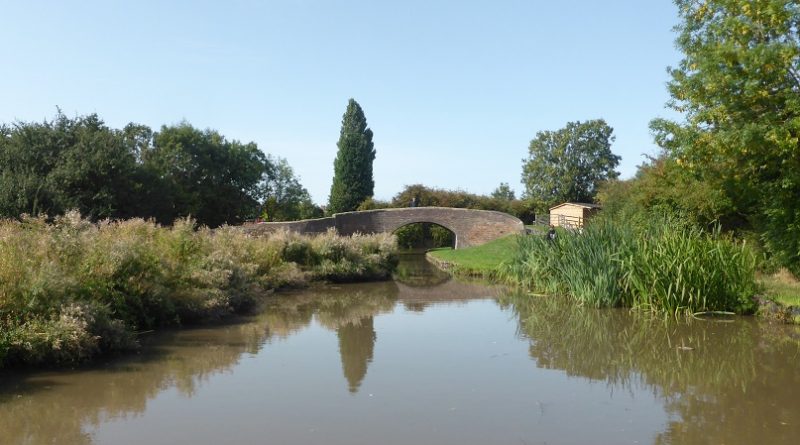 Bridge Zero(?) – the end of the Ashby – turn left normally here but we turn right.

A nice green area just to the north of Nuneaton 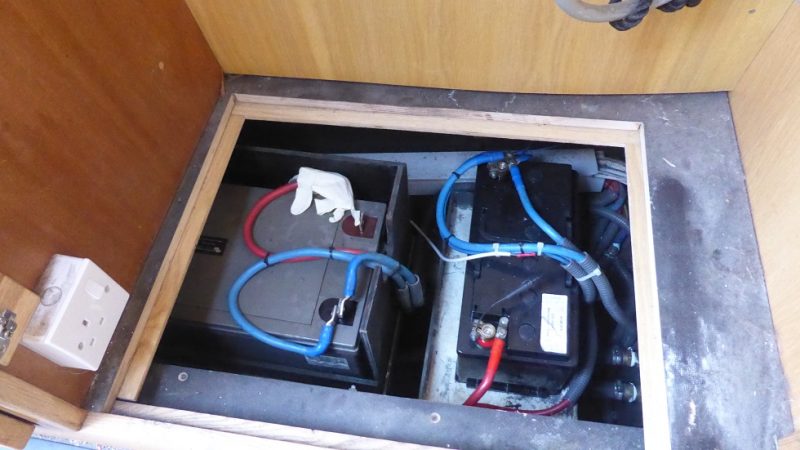 Meanwhile, Friday morning looms and Steve’s all of a quiver – he does fret so but then this is a big day for Adagio – we really depend on these mega, humungous leisure batteries. Above and to the right, is the slightly smaller starter battery (which had to come out too) and to the left is the 65kg 200Ah Victron AGM battery! 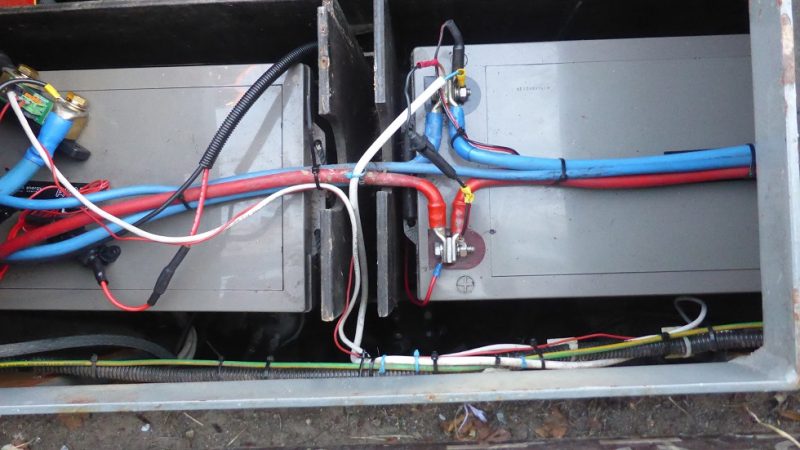 Here’s the other two – a bit easier to get out but all the wires had to come off first. And remember which way they went. 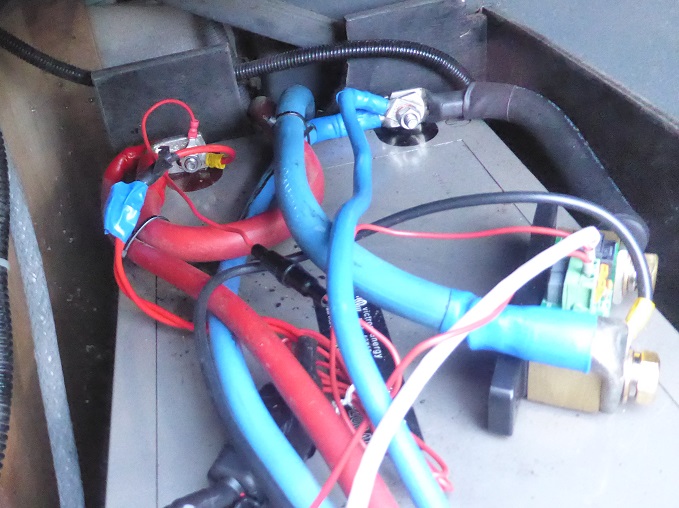 Bit of a pickle isn’t it? Big thick cables carry the main supply in and out, whilst the smaller cables are usually things like the solar input or voltage monitoring. The gadget on the right is the Victron BMV-712 battery monitor! 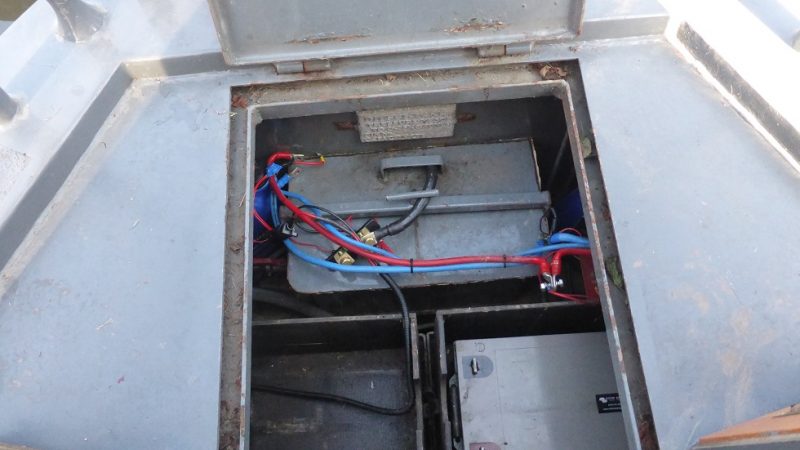 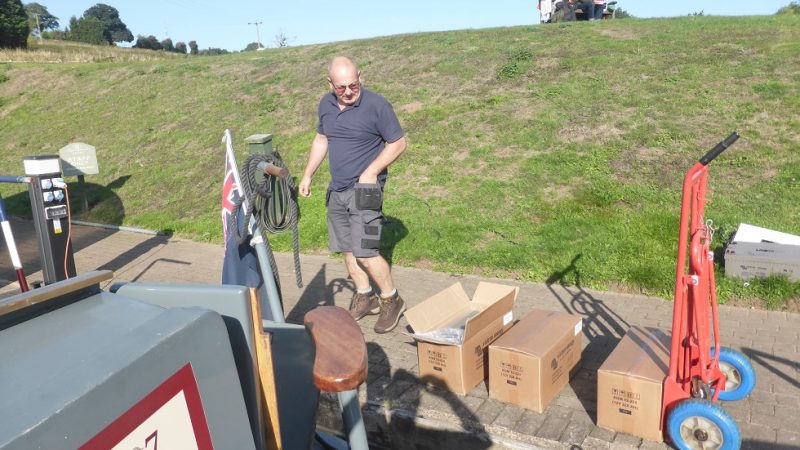 Here’s the famous Kevin – using a sack trolley to bring the brand new and boxed batteries. 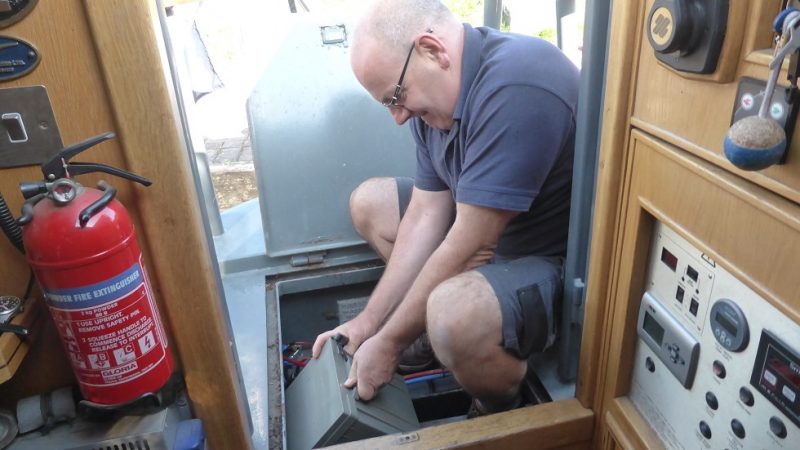 He must have some muscles – he didn’t need much help in manoeuvring these beasts into position. He’s done this before. The whole operation plus the rewiring, checking and replacing all the gear (washing machine etc) took four hours. But at last it was done and after lunch I went to pay – £422 each those batteries!!  But they should last for another ten years and NO maintenance. Kevin also lowered a cable out of the window so we could plug in the Victron charger/invertor – to reconfigure it to the new system. Great. 660 Ah to play with now. Woohoo!! 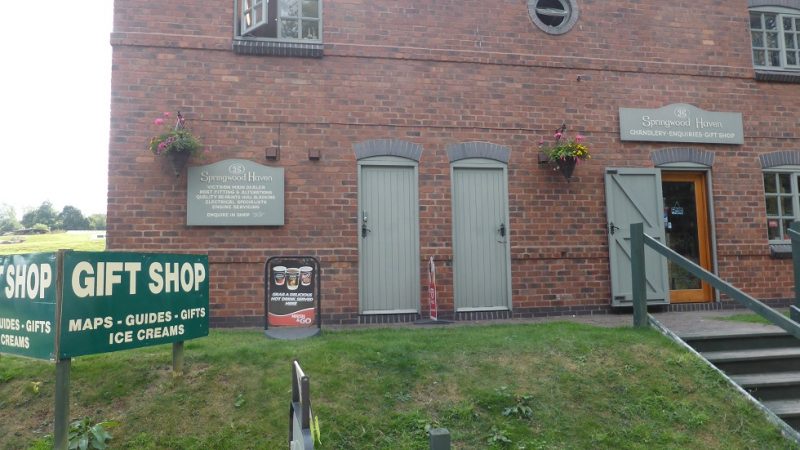 We just drove around the corner 200 yards and re-moored, pretty close to last  night. With oodles of sunshine forecast for the nest 3 days, we’ll stay put and Simon (Empress & Toby2) is not far away and intends to visit later. Good oh.